​In March, 2005 Joanne  flew to St. Louis, Missouri and participated in ‘The Romantic Times Magazine’s Convention.’  She happily developed writer’s cramp as she speedily took notes at the workshops. And her heart pounded as she was interviewed by Kate Duffy, Senior Editor from Harlequin Publishing. To score such an interview, writers had to write and memorize a 6-minute pitch about the romance scenes in their book.  Much to Joanne's surprise, Kate Duffy was literally on the edge of her seat and staring wide-eyed as Joanne recited her 'pitch' with unleashed animated passion.  No other writer was given a 30-minute interview.  The other writers' interviews were only 15 minutes.  You can bet Joanne learned heaps about writing romance into her novel from Kate Duffy. 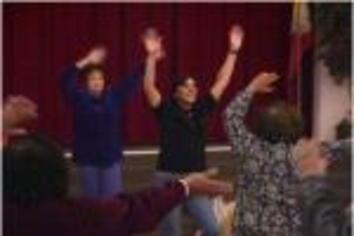 Indeed Joanne felt she truly was in the old frontier when she arrived in Tasmania in the middle of July (mid  Aussie winter), 2012.  She had a very nice 2-bedroom house but like the early frontiers people, she lived as if in a 1 room cabin and not once used the 2 bedrooms (they didn't have heat).  Her only heat was from the wood heater... Didn't take her long to split wood as good as she used to when she lived on her rainforest 25 acres way back in 1999 to 2004. 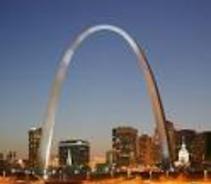 ​Just one of the many breath-taking views from her Buckland Tasmania writer's desk. 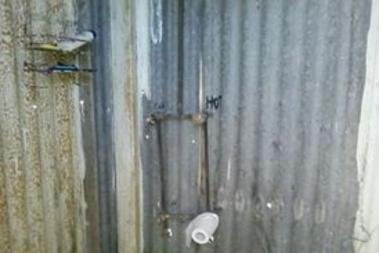 March, 2005, off Joanne went, with her 65-year-old Uncle ‘Auggie,' for a ‘jaunt’---80 mile (128 km) walk to the ‘Cherokee Historical Society’to share her novel’s Volume I. She wanted to walk to honor the 4000 Cherokees who died on the Trail of Tears.  Ft. Smith’s ‘CBS, Channel Five newsman’ caught-up-with-them and a two-minute ‘spot’ was aired on the 6pm TV news. The Cherokee Museum curator placed Joanne’s Volume I synopsis in the Cherokee Archives and in exchange, Joanne presented him with a plant---‘The Cherokee Rose bush’, which is symbolic for the Cherokee’s Trail of Tears.  *See Oklahoma photos. (March 29, 2005, Tahlequah Oklahoma USA) 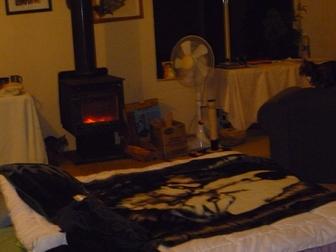 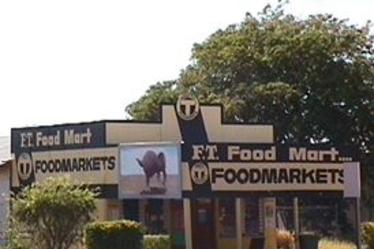 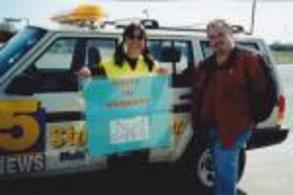 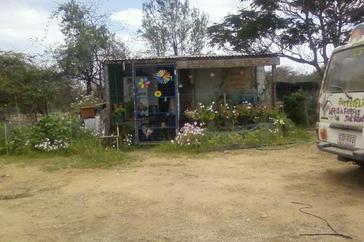 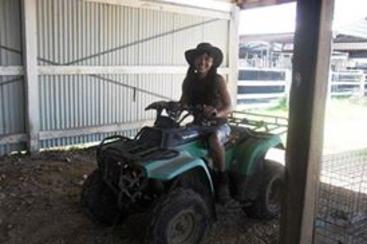 Joanne had to learn to be a writer, she had to go quiet.  Here's a photo of  the covered patio she had built at the beach house she bought in 1999.  Was only a 5-min. walk to the Aussie surf.  Notice how the patio is large enough to be restaurant?  Yeah... She had 5 tables and enough seating for 20!  And, a 6 seater spa. She thought she'd live there until in her 90s.  But, at 48, she had to get away from that 'party type' home and head to a rainforest before she would seriously start to write.

​Since 2003, Joanne has hosted numerous  Reading Sessions in Australia.  The ones that drew the biggest crowds were: for 30 Currumbin Book Club ladies (Dec. 2003), on the Gold Coast Qld;  & for 25 residents of Hughenden, Queensland (May 2005).  This is a photo of her doing the Hughenden Reading.  She's even wearing a rawhide outfit handmade by Cherokees.  And, the biggest crowd was the 100 Filipinos and Mestizos who gathered in Seattle WA USA, Oct. 2005.  She really hams-it-up just like one of those old time radio drama shows. 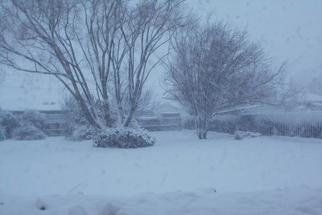 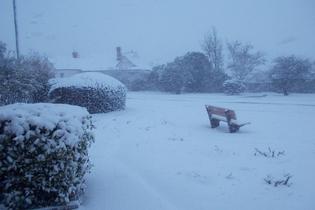 Joey the new-bee jillaroo in 2010, at 59.  The only part she loved about when the mama cows had to be separated from their calves was the so peaceful hypnotic sound made by the calves, calling out for their mamas all night long.  She loved her short 6 months living in Dulacca, Qld.  That was her older sis's 60th birthday - so she sent her a few pictures.

Then, in Dec. 2005 "Thank God," screamed Joanne.  "I'm home again - Down Under!"  Wanting to get a taste of life in Out West (Outback) Queensland, Australia.  Joanne headed for Hughenden, Queensland.  If you blink, you'll surely miss it.  There isn't even one traffic light.  About 300 live in town and the other 1200 live on their huge cattle stations.  A 'small' cattle station is about 22,000 acres; and most are at least 70,000 acres.   Closest Mac Donald’s  is a 5 hour drive.  When it's socked in with heavy rain, there isn’t any milk, bread or other staples for days-on-end.  Check out the major grocery store, 'F.T. Food Mart.'  Shoppers bumped butts shopping in such tight quarters.  The public school, from kindergarten to 12th grade only had 50 students.  But one thing Hughenden isn't short of is pubs --- it has four!  As far as other consumer stuff there's a ‘newsagent’/office supply shop, one petrol station (with two pumps), a post office that shared space with an appliance shop, two ‘shoebox-sized’ clothing outlets and two restaurants.  If you want more than that, you'll  have to drive to Townsville (5 hours north).

Joanne needed to earn a living so she stuck a sign on the town's announcement window which happened to be the bakery shop (of all places).  She was advertising her fitness class!  Within two weeks she had 45 very enthusiastic women signed-up. The ladies were a tad ‘shy’ and Joanne conceded to split them into classes of no more than five women per session. No wonder Joanne, at 55, developed a ‘six-pack tummy,'  with running those classes from 5am to 10am,  5 days/week.

And sometimes, yes,  we all have to reinvent ourselves to make a bit of money.  So, Joanne quick-like learned all about agriculture and beef production so she could be the town's Project Coordinator, assessing folks to get a nationally recognized certificate to prove they could manage a cattle station 'hands down.'  In her ‘spare time’, she provided the little local ‘newsletter’ (which the locals read religiously...) with her 350-word fitness and health articles, weekly. Joanne was very inspired by these so hard-working people who for generations ran and worked their families’ 20,000 acre plus ‘Cattle Stations.' No wonder she thought she was ‘lazy’ by just working 45 hours/week in comparison to their 80 hours/week and then some, and having no time off on weekends.


But, before leaving Hughenden,  those fine folks gave Joanne their 100% support, for a final time.  A number of the locals gathered one very cold winter night to listen to her reading of novel excerpts. Within 14 days, she sold 50 copies of EAGLES OF THE RAINBOW FOREVER Volume I.
​

What do you think of her shower?  That and the toilet were a good 85 steps from her 4 X 16 ft caravan. 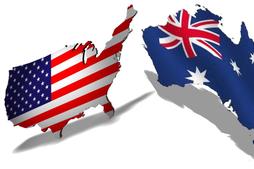 ​There was even snow 4 times when she lived in Bothwell Tasmania (pop. 300).

On October 20, 2005, Joanne found a way to re-celebrate her mother's 15th birthday.  For on that day, in Oct. 1944, her mother's family and some other Mestizo and full-filipino refugees had absolutely nothing to eat or drink for 9 straight days... they ran into the arms of the American soldiers who liberated  them.  Up until then, they had been prisoners of a handful of  Japanese soldiers.  And before seeking sanctuary in that deserted hospital, Joanne's mother and the other refugees, for 3-1/2 years resorted to eating  shredded paper - anything to keep alive.  At 15,  Joanne's mother looked as if only 8, being so mal-nutritioned for 4 long years of WWII.  How befitting that Joanne gave a heart-wrenching memorial speech before 100 filipinos/mestizos on the 61st Anniversary of the Landing at Leyte - which saved her mother, her grandmother and her aunt and uncles' lives.  Laughter roared and tears flowed as Joanne read such moving excerpts from her EAGLES OF THE RAINBOW FOREVER Volume 2. So typical of Filipinos and Mestizos... they served Joanne a delicious banquet of Filipino food. 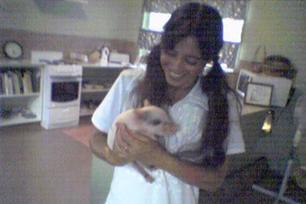 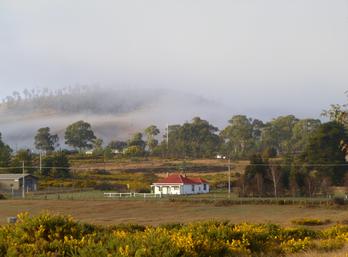 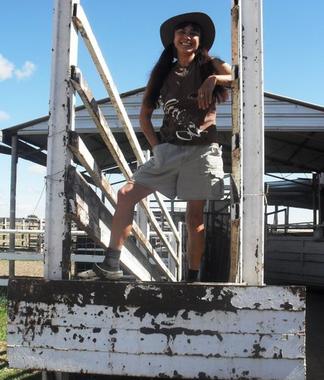 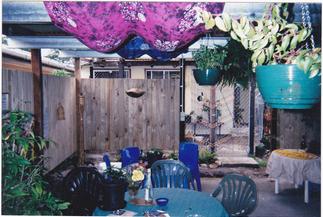 Joanne drove past this view every 2 weeks when she drove a good hour to the supermarket.  Each trip she could almost see heaps of prehistoric creatures poking around those cliffs.

Scroll back up to the Menu to find out lots more.

Yes, Joanne has sure been nomadic!  For the remainder of this page there's a splash of photos showing where she took up more residences.  From Charters Towers Queensland, Australia, she headed way down south --- in Tasmania  in 2012.  *Here's what may appear to be mere trivia but, turns out to be much bigger than trivia:  Tasmania has the cleanest water and air in the world.  It has such an itsy bitsy population --- just about 500,000 people live on this island.  No wonder many call Tasmania 'The Last of the Frontiers.'  No wonder Joanne's writing became like a waterfall in Tasmania. 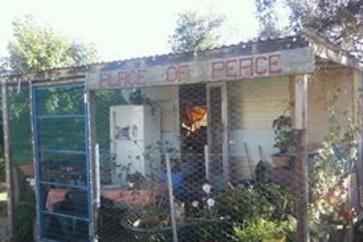 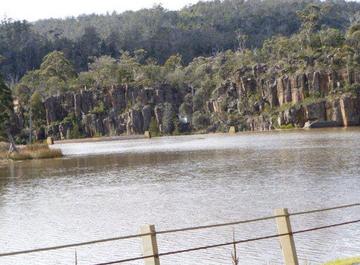 2010, Joanne circles back to Out West Queensland, Aust.  This time it's booming Charters Towers with a population of about 5000.  Her mate let her live on his smaller property of about 23 acres as long as she liked; and she stayed 2 years.  Her mate was a 'real mate' - not a boyfriend... He spent most of his time on his 66,000 acre cattle property.  While Joanne was there she self-published her trilogy novel's first 2 of 3 volumes!   Every 6 weeks or so he'd stay on this smaller property for a few days.  And long into the wee hours of the nights, he and Joanne shared tales.  Yep - they're both Irish!   And it's memories of this place that prompt her to write a short story  ROWAN AND HIS MATE JOEY - Which in Jan. 2021 was published in an Australian literary magazine, ​Better Read Than Dead.

2006 - 2010 Joanne hangs-out at Wide Bay Queensland or what's called 'Hervey Bay.'  "You can take the girl outa the country; but you can't take the country outa the girl."  When Joanne left  Hughenden Qld, she landed in Hervey Bay, Qld.  But, she STILL had to have heaps of land around her.  Naturally, she rented a farmhouse on 40 acres.  And yes, here she is with her precious pet piglet, named Cuddles.  And  'she' was an indoor pet.  And she played with Joanne's Blue Heeler/Border Collie named Shiloh and cat named Zero.  It was in that farmhouse that Joanne was contracted to ghost-write for a doctor, who was totally pleased with the end product - a 20,000 word novella. 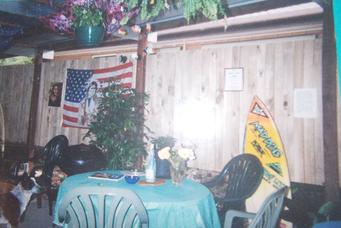 In May 2004, fancying that she was madly in love, Joanne headed back to the USA.  But, she planned to only be there 6 months.  This-and-that happened... And much to her dismay (and under much protest) she stayed there 19 months.  That relationship went sour but Joanne forged ahead in her writer pursuits. 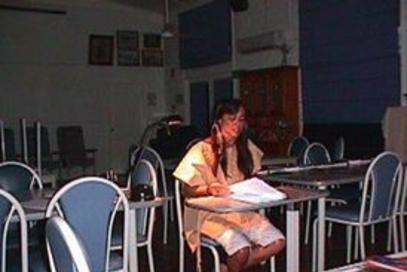 In Oct, 2005, Joanne mingled with dozens of well known authors on her 10-day 'Get Caught Reading at Sea' cruise.   Vince Flynn gave her a good hour pep talk about getting self-published.  He said that's how publishers took notice of him.  Lee Child's spent hours lecturing her to not get 'Genre stigmatized,' like him.  It's a good thing Joanne sailed without a partner because her stateroom became a ‘promotional headquarters’ with her busily composing flyers and printing them out... slipping them under the stateroom doors of at least 40 well known authors.  And did Joanne learn a myriad of knowledge from Kathryn Falk – ‘The Queen of Romance’ and owner of ‘Romantic Times Magazine’, who so generously mentored Joanne for a few hours .And yes, she saw the Maya Ruins, Progresso and heaps of sites. 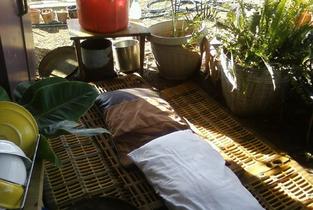 Even in such rough quarters, Joanne made a makeshift 'gym' and worked out every day. 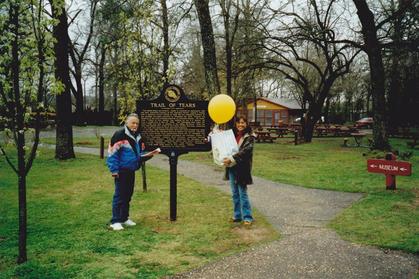 From 2010 to 2012, she planted herself in this 4 X 16 foot 'hobble' or caravan.  It was tucked-away on her mate's Out West Queensland Australia property.  It's the smallest property he owns.  He spends most of his time tending to his cattle on his 66,000 acre cattle station.  He only stopped-in at this smaller property every blue moon.  Being part Irish himself, he and Joanne shared tale after tale into the wee hours of the night.  It was there Joanne did some serious editing.  It was there and then that she self-published the first two volumes of her trilogy novel, EAGLES OF THE RAINBOW FOREVER  Volumes 1 and 2.

​Joanne sure has her Irish and Cherokee ancestors'  nomadic ways.  Talk about a writer and her novel 'going on walk about?!'