Volume Two​(655 pages)  -  Opens in 1864. 'The Sooner State,’ Oklahoma, booms as 50,000 people claim gold- and oil-laden land. It continues to give unique insight into prejudice. Skin color (whether white, brown, yellow, red or black) does not immune anyone from his or her struggle to learn that there is 'unity in diversity.’

As each of the six founders of 'Place of Peace' move to  The Upper World – Heaven, they smile with peaceful satisfaction knowing that their descendants will strive to live 'unity in diversity.’ Connor and First Light Bradigan's sons, Eagle Heart Sun Patrick and Robert's Feather embark on their Manhood Quests and Rite of Passages. One son discovers and lives by Dog Medicine or Loyalty. The other son struggles to live by Snake Medicine or learning to achieve Wholeness. The Bradigan's youngest, Eagle Dove makes 'Place of Peace' a haven for descendants of 'The Trail of Tears.’ Connor and First Light's grandson Daniel,  finds his way to the Philippines. He is completely enchanted with these Islands and the people. He is a soldier in Dewey's 'One Day Battle' and 'The Boxer Rebellion.’ Another soldier, Jonas Heinrick sees the Filipinos as only 'a means to an end.’

Daniel Bradigan and Angelica fall deeply in-love. Their marriage is for eternity with their wedding in full, festive Filipino tradition including 'The Sanctus,’ 'Yugal' and the 'Unity Candle.’

Their son Daniel Bradigan  ('Danny') finds a very special friendship with Constance Heinrick. Their bond grows despite coming from families so opposite in values. The attack on Pearl Harbor, December 7th, 1941 changes everything and everyone. Danny, Constance, other 'half breeds' ('Mestizos') and Americans must cast aside their childhoods and in their early teens they become determined and keen survivors. Bullets, starvation, disease, bigotry and atrocities truly tax their hope to stay physically and emotionally alive.

Myriads of feelings are portrayed by teen-aged Guerrilla (Jungle) Fighters, refugees and soldiers. The 'Bataan 90-mile March;’ powerful nations breaking promises; bigotry; heinous atrocities committed by people of all racial backgrounds and the Atomic Bomb cannot break the war victims' spirits to live by one code: 'There must be Unity in Diversity, for Civilization to reach its highest potential.' Volume II's adventures, lessons and romances, pour into Volume III, which opens in 1949 and closes in 2018.

They desperately need some manuals - 'How to Have a Happy Marriage' and 'How to Raise Kids without Killing them.'  As if all that’s not more than enough… Danny and Constance are haunted by WWII.  Back in their homeland, the Philippines, Danny was a Guerrilla Fighter (from 13 -17) and Constance was a starving refugee (from 12 -16).  Even though they immigrated  to America, the nightmares never stopped. But, because of that War, they vowed to pass a ‘gift’ to their children… That is, to never have any racial, religious, age, gender or socio-economic prejudices.

Then, Rosarita Beach’s wild surf sets them on fire with hot passion. And Dawn Bradigan's birth is their 'Lucky Charm.'

Danny wonders why he can't raise a child like he so easily mixes his Scotch 'n water. Meaning---raise a child who is powerfully smart and the other child who has an inordinate desire to save the world from itself. Having Catherine and Dawn keeps Danny forever frazzled with frustration.

Constance, a greyhound at the gate unstoppably races, as she climbs her career ladder. Her goal is to succeed, at being being both the best and the wealthiest of her peers. And as a result housewives of the 1950's/1960's chastise her.

Their Hayward home becomes a laboratory and they each add  parts to the  often,  Bradigan Family's Emotional Atomic Bomb. Ironically other kids see the Bradigan's home as an Oasis – a place of peace, laughter, acceptance, philosophical talk and Life direction.

For Catherine, the world is her oyster.  Yet, with Dawn? Well, she knows  she's not the sharpest tool in the shed. But how they flourish, as teenagers during The Flower-Power 1960's. How they question a president's assassination & the Vietnam War.

At 35 Dawn ploughs a new 'Road in her Life.’ She and her 9-year-old daughter make Australia their new home. No job, no furnishings and very little money... Dawn lives the song's lyrics: 'Don't mess with the girls out here. It's a wild 'n crazy chick frontier...' She savors rainforests, the 'Outback,’ living simply (but fully)...  She passes on that ‘Gift’ given to her by her parents --- to never ever have racial, religious, age, gender or socio-economic prejudices. 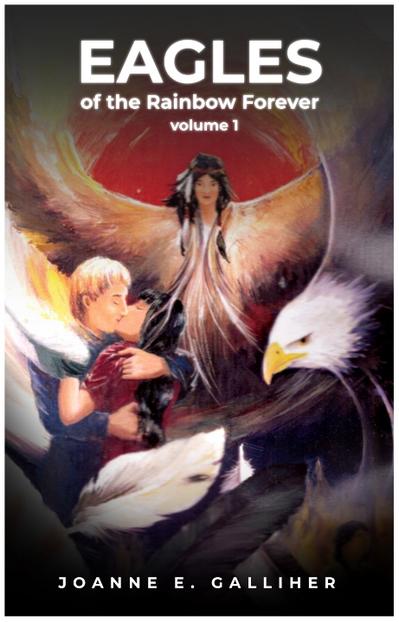 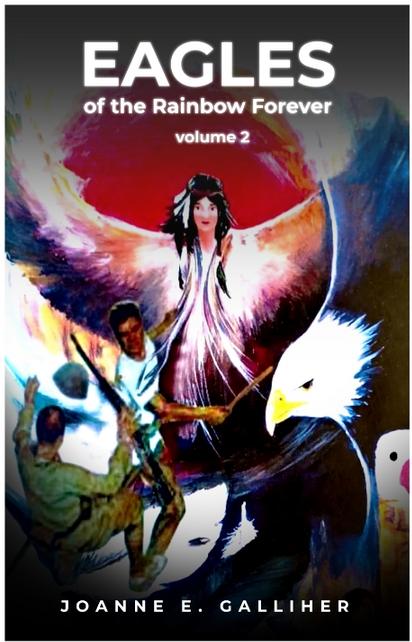 ​Journalists and readers attest EAGLES OF THE RAINBOW FOREVER is a rare and timely spellbinding saga. It portrays prejudice from a different angle. Cherokee, Irish, German, French and Colonial Americans learn to mesh instead of clash. Solidarity spirals with every mixed marriage; and every sharing of cultural customs, ceremonies, and celebrations.

Its scintillating narrative and captivating characters weave through romances, Nature encounters and stirring adventures, making it a page-turner for a vast readership (https://www.wavesofoneseawriting.com/reviews-of-eagles-of-the-rainbow-forever-volumes-1--2-and-3.html). The Cherokee Trail of Tears, Irish Great Famine and American Civil War could fester bitterness; but the characters opt for betterment. It is a convincing testament that we humans can slay hatred and more than spare harmony. Like the saga’s sagacious characters, we too can eliminate our racial, religious, age, gender and socio-economic prejudices.

It opens on a stifling dawn in 1833. Eleven-year-old First Light doggedly crawls beneath the smoke of burning human flesh. She numbs her innocent heart as she climbs up-and-over her dead fellow Cherokees desperate to find her family whether they are alive or dead. She forces herself to examine their mangled bodies, looking for their Wisdom in Wounding; for that will stoke her tenacity to achieve her two all-consuming new missions. She must annihilate her hatred for white people and awaken her desire to live in harmony with all people. Until she does that, those massacred Cherokees are trapped in ‘Where the Dog Runs’ (Purgatory) instead of taken to the Upper World (Heaven). Obsessed with freeing them and finding a new homeland, she becomes a lone wolf; and any Cherokees she meets treat her as an untouchable. Every dawn she is plagued with self-doubt. Can I, someone who is all alone, escape? Can I, someone all alone, find a new homeland for my fellow Cherokees?

Weddings, funerals, the Cherokee Seven Sacred Ceremonies, Christmas, Saint Patrick’s Day, and more, meld them in joyous unity. Nature becomes God’s church. A ten-year-old’s Rite of Passage proves we learn wisdom from both young and old. Men and women no longer have gender-set tasks. All learn the riches people are those who know the difference between wants and needs. No wonder many journalist acclaim EAGLES OF THE RAINBOW FOREVER is a unique template for world peace, with unity in diversity as its foundation (https://www.wavesofoneseawriting.com/multi-media-coverage-received.html). 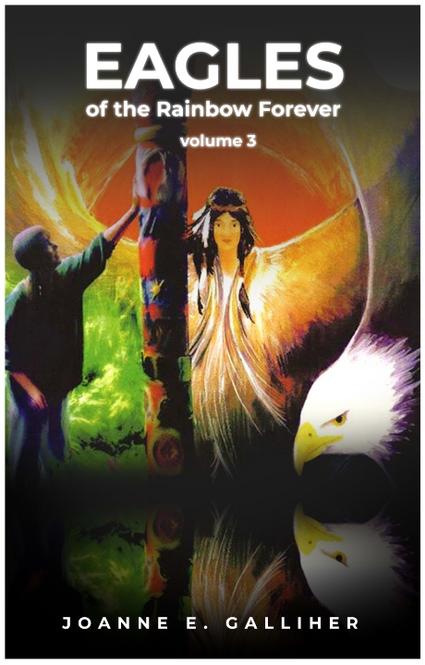